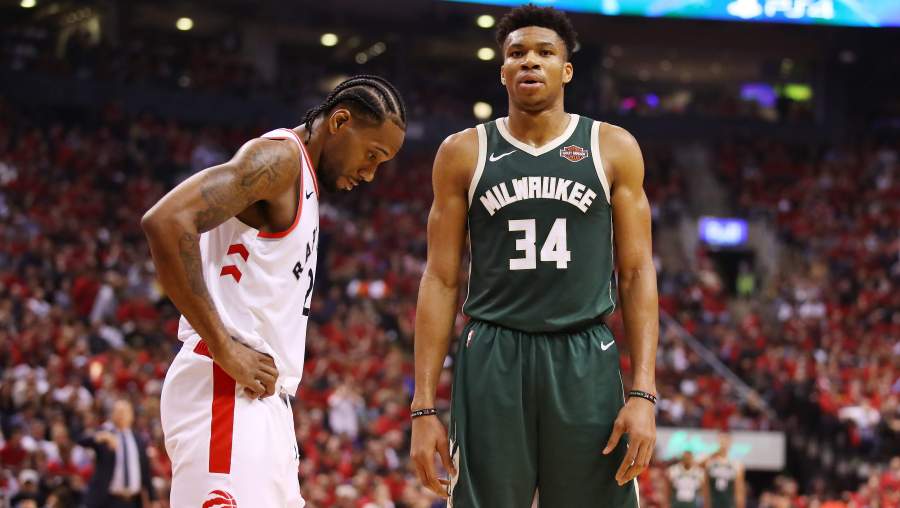 Never overreact to one game. After a game two shellacking of the Raptors, everyone and their mothers prophesied the Bucks to sweep the Raptors in the Eastern Conference Finals, or at the very least to finish the series off in five games with little fear of any danger. Only three days later we have a three-game series on our hands (by the way, the NBA should look into doing a three or at least five game series in the first round, much more unpredictable, and unpredictability is proportional to ratings more often than not). Everyone is foaming at the mouth for the ensuing five days of NBA action that will decide who challenges a seemingly invincible Warriors team. Here are some things to look out for:

I’m not the only one that’s called for this. There’s a reason I voted for Middleton as the 2nd Bucks all star over Bledsoe, even though Bledsoe was having a superior statistical season. I just can’t trust him no matter how good he might look for certain stretches. I can’t trust his streaky three point shot (currently shooting 10.5% from three this series). I can’t trust his off ball defense due to lack of attention to detail. I can’t trust his ability to take care of the ball, as he often dribbles with his head down while penetrating, leading to a plethora of out of control layups and no look turnover passes. Coach Budenholzer has definitely taken notice to, as Bledsoe has been benched multiple times, playing 113 minutes so far compared to Brogdon and Hill playing 116 each. I would take it a step further, and bench Bledsoe and Mirotic to start the game, rolling out a lineup of Hill-Brogdon-Middleton-Giannis-Lopez. I get that they might want to keep bringing those two off the bench to stagger minutes and keep things familiar (Coach Bud is a legendary anti-adjustments guy), but at this point, you just need your best guys, specifically the guys you can trust. George Hill is on the tear of his life, shooting 50% from three and 52% from the field, and is known for not dominating the ball and being a steady presence, i.e. he won’t kill you with stupid mistakes like Bledsoe. Brogdon has looked great coming back from injury, as he’s the team’s best shooter (he reached the hallowed 50-40-90 split this season) and his gargantuan 6’11” wingspan makes him a solid Kawhi defender. My disparaging of Bledsoe doesn’t let Mirotic off the hook either, as the supposed three point specialist is shooting a wretched 21% from three this series, and can only hide on Danny Green on defense. I know the Bucks motto all season was “We’re just gonna do what we do no matter what’s going on or who we’re playing”, a stability over flexibility kind of thing. That’s great for dismantling a team allergic to stability in the Celtics, not so great for taking down a seasoned and determined Raptors squad. The Bucks need to let Bledsoe only see the court for 24 minutes max in game five or he’ll only make them feel worse about that 70 million dollar contract extension.

2. How the Raptors Use Pascal Siakam

We’ve seen a lot of teams adopting the 2015 Warriors’ Bogut on Tony Allen strategy, even applying it to decent shooters. Just ask the Blazers how hard it was to find court spacing with defenders sagging off Aminu and Harkless by more than 10 feet, happy to let them fire away from beyond the arc. The Bucks have put Giannis on Siakam so that he can hover near the basket and wreak havoc, the exact same thing the Sixers had in mind when they put Embiid on Siakam a round earlier. The Raptors haven’t been killed by this, as Siakam managed to get 25 points in game three, and the bench picked up the slack in game four while Siakam was held to seven points. So how will Toronto adjust? A popular idea is to have Siakam ball screen repeatedly for Lowry and Leonard, hoping that those two will be able to walk into wide open shots with Giannis sagging off. The problem with this is that Giannis is smart enough and the Bucks are long enough that they’ll see it coming and simply rotate for one extra second while Giannis recovers with break neck speed using his alien legs. They could also just have Siakam pull an Antoine Walker, “I’ll shoot 50 threes even if I miss all of them,” kind of strategy, as he did shoot 37% from the three for the regular season, and it’s not unreasonable to think he could make 5 of 10 in one game. However, the Bucks are banking on that fact that Siakam does not want to shoot more than four threes each game and that he will not shoot well if his shots are not in rhythm, but instead wide open shots where he has time to wait, doubt, and overthink the soon to be brick of a shot. Siakam did have some success in game three posting up on Kawhi, scoring twice on up and unders, Giannis being almost surprised that another guy could post up similar to how he does–a herky jerky compilation of spins and flailing limbs. But yet again, the Raptors probably won’t go to a “let’s post up Giannis” plan with your franchise’s most important games ever on the line. Here are the the two things that might work. First, set more screens on Giannis to try and get him confused, especially cross screens for Siakam, as you can use the Giannis sag against him, as he won’t be watching Siakam to see him sprint from the corner to the opposite block for layups. But my favorite idea is this one. Have Gasol post up more, as his massive body pounding towards the rim will draw attention and force Giannis to help in on him. At this moment, have Siakam cut in from the corner to the dunker’s spot, where the excellent passing Gasol will find him with perfect precision. They did this a few times in game three and it worked every time, and probably got Siakam going for what was his best game of the series.

3. Giannis as a Ball Screener

I begged for the Sixers to run more lineups with Ben Simmons as a ball screening center, as his athleticism and playmaking on the short roll was devastating. If Ben Simmons as a roller is a grenade, then Giannis rolling to the rim is a nuclear warhead. The defense’s options are a) to switch a completely undersized guy onto him, b) high hedge and allow Giannis to get good positioning while also leaving a shooter open in the corner off a rotation, or c) to have Giannis’s man stay in the paint and give up a wide open jump shot to the pick and roll ball handler. The Raptors have opted in favor of c, and that has proved the correct choice for the most part. But you can’t go to the same choice every time. Sometimes the offense makes you do things you don’t want to do, which is how you get wide open Giannis rampages to the rim. I’m positive that any screening action involving Giannis terrifies the Raptors, as they either have to give the Greek Freak even more of an advantage than the physical tools he already has, or they have to give up a quality look to a professional basketball player. Don’t shy away from this pseudo small ball idea. Giannis is a world class sprinter that’s as strong and physically imposing as Shaq. Make the defense have to continually make decisions in how they’re going to contain him.

I’ve been on several islands. I’ll defend TJ McConnell, Ian Clark, and Joe Ingles to the death if I have to. But Norman Powell has always been one of my guys. People forget that he in some ways saved the Raptors from their 4th straight first round flame out in 2016, swinging the series with his 43% three point shooting and excellent defense on Paul George, including a steal and dunk sequence that punctuated an 18 point Raptors comeback in game five (Not to mention, Powell is one of the best Game of Zones characters out there, with lines like , “I am also Kyle’s friend,” and, “Jake Puddle”). Powell is the Raptors third leading scorer in this series! He was dormant for over two months, but awoke from his hibernation in time to produce two signature over 15 point plucky bench guy performances. He’s a reliable defender, is a good three point shooter whose streaky tendency to catch fire does make defense wary, and he is never afraid to shoot or use his athleticism to beat guys to the rim. If you want proof, just go back and look what he did to poor Pat Connaughton in game four. If I’m Nick Nurse, I definitely give most if not all of Fred VanVleet’s minutes to Powell. Freddie V’s shot has gone so haywire that you might actually think that his look alike Drake decided to suit up for the Raptors. I’m not saying to go crazy and run the whole offense through him, but I guarantee that Powell is the kind of they guy that can get you 10 points in a crucial game in Milwaukee. Guys like that are hard to come by and can’t be looked over.

Everyone wants to stay with their original pick. Before the playoffs started I said Bucks in seven on their way to face the Warriors in the Finals. But man, I just don’t think I believe in them right now. It shouldn’t be overlooked that they were dominated for three quarters of game one, and that they basically laid a complete egg in game four. They’re still a team with absolutely no experience and their roster is filled with guys that we’ve been questioning all year (Bledsoe, Middleton, Mirotic, Illyasova, etc.). It just feels like the Raptors want it more, that their desperation to finally get over the hump is just willing them beyond what their actual play allows. That game seven Kawhi shot might possibly have been a premonition of things to come. It’s the Raptors destiny to finally win the East… and then to get destroyed by Golden State of course, but who’s counting?

My pick: The Raptors win the next two games and take the series in six.

One thought on “What to Look for in Games 5,6, and 7 of the Bucks-Raptors Series”